My one and a half year old son has a shape sorter. You’ve seen them – a bunch of shapes with a box that has a hole for each shape. He’s gotten pretty good at this little sorting game in his one and half years of life, but occasionally, he misses the mark. Every now and then he tries really hard to get the star through the heart shaped hole, or the circle in the square shaped hole, or as the old saying goes, “the square peg in the round hole.”

When he thinks he’s got it right, he will just sit there banging the shape into the top of the box, trying his hardest to get it to fit down into the hole. After he bangs and bangs and pushes on it, you will even hear him tell the shape, “Go!” Poor guy. He will work harder and harder to try and make it work, but his efforts are in vain.

I’ve been there. Have you? Trying with all your might to solve a problem and although you are working harder and harder, just like my son, the solution you’ve chosen is just not working.

“Too many people, when they make a mistake, just keep stubbornly plowing ahead and end up repeating the same mistakes. I believe in the motto, ‘Try and try again.’ But the way I read it, it says, ‘Try, then stop and think. Then try again.’ “

If my son would only stop and reflect for a moment, I’m confident he would realize that the shape he’s holding is a star and not a heart and he would adjust his stance and solve his problem.

Let’s take a moment to stop and reflect before this next school year begins so that we don’t just continue “stubbornly plowing ahead” “repeating the same mistakes” when all we need to do is take a moment to reflect – “Am I holding the right shape?” “Am I putting it in the correctly-shaped hole?”

How can you address it in a new way? (Instead of continuing to try the same old solution even though it is not working – like putting a square peg in a round hole)

Honestly, the first thing that came to my mind when I thought about my campus was hallway behavior. We tried several different strategies last school year to improve hallway behavior, and it did improve, but not to the standard I had hoped.

In Aaron Hogan‘s book Shattering the Perfect Teacher Myth, he suggests making a plan to establish and reinforce clear expectations. Some of his advice includes:

I’m making a plan NOW for how I want to teach and reinforce hallway behaviors on my campus. What do you need to address in a new way on your campus?

Now’s the perfect time to make a plan for success! 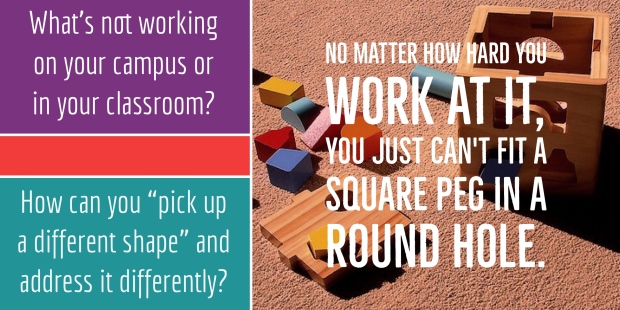 View all posts by Meredith Akers

Meredith Akers is an Elementary Principal who believes that the best way to help others grow is to build relationships, offer support, serve, love, and be transparent about how she is working to grow herself. Her daily aspiration is to make a positive impact and to leave those she serves better off for having interacted with her.